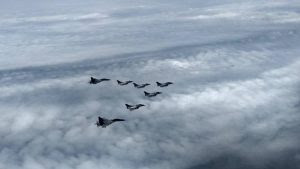 Rafale jets arrived in India: A fleet of five Rafale multi-role combat jets manufactured in France has reached India. Rafael Jets landed at Ambala’s Air Force base after traveling 7,000 km from the Merignac airbase of the French port city of Bordeaux. After entering Indian airspace, two Sukhoi 30 MKI aircraft received him. It flew with him to Ambala. Also, the fleet consists of three single-seater and two twin-seater aircraft.  These are inducting into the Indian Air Force in its Ambala-based squadron no 17. It also has the other name which is the ‘Golden Arrow’.